In one of the most far-fetched plots from the first season of MAS*H, Frank Burns gets his blood drained and donated while he sleeps.

Next, when the patient who receives the stolen blood tests positive for hepatitis, Hawkeye spends the rest of the episode trying to verify whether Burns’ blood is the source of the diagnosis while keeping Burns away from operating on the patients or getting too close to Margaret — just to be safe (and ridiculous as possible).

The audience knew that keeping Frank away from Margaret would prove a challenge, as the couple’s shocking affair kicks off right at the start of the show with an iconic game of footsie.

In 1975, the actor who played Frank Burns, Larry Linville told The Shreveport Journal that he thought Margaret looked to Frank as a father figure. He said portraying this slightly squeamish romantic dynamic with Loretta Swit was probably tougher than you might think.

“You know Loretta and I are running right down a razor blade,” Linville said. “We have to stay on the edge [of true romance] and that calls for a lot of controlled acting.”

Linville said he was up for the challenge, not just because MAS*H was a major role in his career, but also because he thought it was important to help people recognize slimeballs like Frank Burns, so they can turn and run the other way.

“Frank is the type of character I personally despise,” Linville said. “It’s a matter of ego, but I think I’m doing a service by delineating this type of person. You know, so you’ll be able to recognize him.”

He went so far as to label Frank Burns “a dangerous piece of work” during an interview with UPI in 1995.

“I pulled out every box in my head marked nerd, moron and slime,” Linville told The Philadelphia Inquirer in 1986.

Playing Burns required a balancing act that Linville had to do where he said he felt like, “You either had to look like a total fool or just be repulsive.”

At the time that he created Frank Burns, Linville was a married man. From 1962 to 1975, his wife was Kate Geer, the actor daughter of Will Geer (The Waltons). Joining this acting family, Linville shared the screen with both his wife and his father-in-law in his career.

After their divorce, Linville remarried several times, seemingly falling into romances as easily as Frank Burns fell into Margaret’s arms. During the show’s run, he would wed twice more, in 1977 to Vana Tribbey and in 1982 to Melissa Gallant.

It wasn’t until his fourth marriage to Susan Hagan in 1986 that Linville started getting coy during interviews, showing a bit of that ferret-faced Frank Burns spirit.

At least once when asked outright by The News and Observer whether he had any actual romantic entanglement with Swit on set, Linville refused to answer straight.

No matter how much “slime” Linville put into Frank Burns to make him despicable, though, the character ended up being directly responsible for attracting the actor’s fifth wife to him.

Linville told The Edmonton Sunday Journal in 1994 that he met the last woman to become his wife Deborah Guyden at a Halloween costume party. He went dressed as Frank Burns, and he apparently performed “surgery” at the party, because when he left, he had Deborah’s heart.

Finding roles and finding love both proved ultimately to be finicky for Burns, who said even though his career and personal life has dealt with some seesawing between successes and failures, he was content with the decisions he made that led him to MAS*H and all his greatest loves.

“I’ve been a millionaire four or five times, married five times,” Linville said. “If I had wanted big bucks, I would have gone to Harvard Law School and learned how to screw other people out of their money instead of my own. I’m very pleased with that decision.”

It’s easy to see why Linville’s MAS*H costar Mike Farrell came to this conclusion in his memoir, Just Call Me Mike: “In real life, Larry Linville was as personally intense as Frank Burns.” 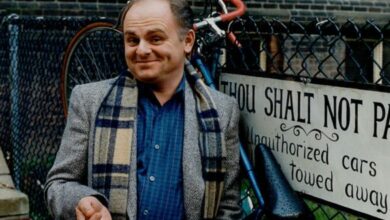 ‘M*A*S*H’: Why Did Radar Actor Gary Burghoff Leave the Show?