While many actors from M*A*S*H remain beloved, one who stands out is Wayne Rogers. He actually had a comedic side away from TV.

The much-remembered “Trapper John” McIntyre actor would get laughs in his own way. Well, especially when the cameras were off sometimes, too. Toss in those outtakes caught on camera as well. Do we have an example? Yes. We get some help about this from Looper.

It appears that his best one is an improvised joke after Alan Alda messes up his take. You will recall that McIntyre and “Hawkeye” Pierce, played by Alda, were best buds.

OK, so Hawkeye is in this scene. He is speaking to an Army doctor and lists where he can go help in Korea.

Alda, though, says the same line twice. He forgets about his net line. Rogers, as Trapper John, speaks up while counting dollar bills: “Or you could stay here, we don’t give a d***.” Both Alda and Rogers crack up and crew members chuckle too.

The M*A*S*H actor was part of the show for three seasons. But the actor left between Season 3 and Season 4. Why? He didn’t like that Trapper John was a sidekick to Hawkeye. It wasn’t becoming his own character.

Rogers Skipped Out On Reprising Role In Later TV Series

The last time Rogers appeared on the show was in a 1975 episode titled Abyssinia, Henry. Henry, of course, refers to Henry Blake, played by McLean Stevenson in the TV show.

Heck, Rogers did have a chance to play Trap again on Trapper John, M.D. Rogers took a hard pass on it and Bonanza star Pernell Roberts stepped in to fill the shoes.

But Alda remembered a time when he had a dream. He talked about it with Rogers and with The Hollywood Reporter.

“I told him about one in which I was playing a scene in the show and the director asked me to crawl up the side of an armoire and do my lines from there,” Alda said. “Then, he made it worse and told me to go the top of the cabinet and play the scene from there. He said he could get a better shot that way, even though I knew there was no reason for me to be on top of an armoire.

“Wayne thought about this silently for a couple of miles and then he said, ‘This is an important dream. Directors are always asking us to do things that are unbelievable, just to accommodate the camera. Your dream is telling us never to do that. We have to remember never to do an armoire.’ And we did remember.” 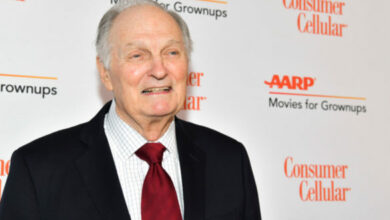