Christopher began his acting career on the stage in various regional productions and eventually on Broadway in the British revue, “Beyond the Fringe.” A move from New York to Hollywood led to guest appearances on many popular shows of the 1960s, like “The Andy Griffith Show,” “The Patty Duke Show,” “Gomer Pyle, U.S.M.C.,” “That Girl,” “Hogan’s Heroes,” “The Love Boat,” and, later on, “𝕄𝕦𝕣𝕕𝕖𝕣, She Wrote,” “Mad About You” and “The Odd Couple.”

His big break, however, came in 1972 when he joined the cast of the Korean 𝕎𝕒𝕣 comedy “MAS*H” as Father Mulcahy, and later took the role to the series’ spinoff “AfterMASH” in 1983.

He later appeared in the films “The Fortune Cookie,” “The Shakiest Gun in the West” and “With Six You Get Egg Roll,” to name a few. 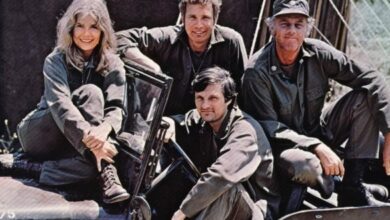 ‘M*A*S*H’: One Nurse Left the Set To Become a Boxing Referee M*A*S*H gave the towering, talented Brian Dennehy one of his first onscreen roles